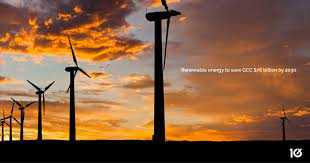 GCC as a region boasts to be rich in hydrocarbon reserves, enough to maintain its position as one of the most formidable suppliers of energy to the rest of the world. According to the BP Statistical Review of World Energy June 2016, GCC collectively holds 29 percent of the world’s oil reserves and 22 percent of the world’s gas reserves. The region also accounts for 23 percent of global crude production and 11 percent of natural gas.

Despite being self-reliant and rich in hydrocarbon reserves, the GCC’s consumption patterns and an insatiable demand by industries, is a harbinger of rising long run sustainability concerns; a matter that has rightly caught the attention of governments within GCC.

The World Economic Forum notes that energy consumption in the GCC countries has grown at an average of 6 percent per year since 2000, outpacing GDP growth (at 5 percent) and population growth (at 4 percent). In the case of Saudi Arabia, the 8th largest producer of gas in the world, the domestic demand for electricity and water desalination is already so high that it must cover half of it by burning crude. Similarly, rising demand for domestic electricity has made UAE a net importer of natural gas.

Although low energy prices due to abundant supply, has fuelled economic growth, it has provided little incentive for energy efficiency and conservation, making per capita energy consumption in the GCC amongst the highest in the world. Moreover, the value this is adding to the economy is significantly below developed countries, and is decreasing.

GCC governments realise that if they do not respond by either curbing demand or creating alternative energy sources, domestic consumption could absorb most of its hydrocarbon production within the next 10-20 years, severely limiting the region’s ability to export crude and eventually leading to negative consequences for the national economies.

Keeping this in view, the governments have embarked on a diversification strategy to meet growing energy demand by announcing plans and targets for conserving natural resources, improving energy efficiency, and deploying renewable technologies.

The abundance of solar resource potential and the falling cost of associated technologies, mainly photovoltaic (PV) modules are major factors influencing the attractiveness of solar energy in the region. The GCC countries lie in the so-called Global Sunbelt and boast some of the highest solar irradiances in the world. Close to 60% of the GCC’s surface area is found to have excellent suitability for solar PV deployment, and developing just 1% of this area could create almost 470 gigawatts (GW) of additional power-generation capacity (Renewable Energy Market Analysis: The GCC Region).

Coupled with resource abundance, falling technology costs are translating into record low generation costs. The recent auction for the Mohammed Bin Rashid Al Maktoum Solar Park 2 in Dubai yielded prices as low as 5.85 US cents per kilowatt-hour (kWh). This price is one of the lowest in the world and even competitive with oil and gas in the region.

Additionally, if the GCC countries’ renewables objectives are met by 2030, International Renewable Energy Agency (IRENA) estimates that the projected 80GW renewable energy capacity could create an average of 140,000 direct jobs every year, lead to USD 55 billion to USD 87 billion worth of savings in fuel consumption, reduce CO2 emissions and lead to an overall reduction of 16% in water withdrawal (in power sector).

The World Economic Forum highlights that benefits of green energy initiatives are critical to the following contributions by the GCC: